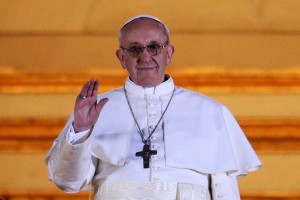 The Pope the World needs today

Habemus Papam! We have a Pope, Francis I and the internet is awash in speculations, opinions and more.

I have no idea who Cardinal Bergolia was or is, today as Francis I, but all we can pray is God gave us a Pope that we need, and not a Pope we deserve!

Looking at statistics today, the Church looks more dire today than ever. The faith in our young people is fading so fast, it’s painful to watch. Watching the crowds from the live feed at the Vatican, I was reminded; what did this same thing look like 100 years ago? Such an important time was likely free from the paparazzi and there would be more rosaries said and less screaming.

The Pope is the head of the Church. He represents all of us to the world, and is representative of Christ himself on earth as he leads.  We have to admit that there is growing consensus that we have been wandering in the dessert for a long time.

As more and more scandals in the Church are uncovered, more and more we see how Christ’s church is undergoing a humiliation, liken to the time of his Passion.

While the Church has been trying to appeal to the modern world by opening the doors to it, it has instead weakened the faith of millions, opened the doors to traitors and and left millions confused. Most importantly Our Lord’s Sacred Heart is bleeding for the souls of those He loves.

Everywhere I turn here, I am met with middle aged people that ‘were’ once Catholics. Some call themselves recovering Catholics, as if you can ever recover from being Catholic? But, the volume I see, nearly every second person I know here, that were ‘once’ Catholic and no longer are, is a staggering look at where the Church has come in 50 odd years.

Looking at the many faces in the crowds from the live feed, as Francis I spoke, I noticed a confusion, mixed emotions in the faces there. As the yelling died down you could sense they were trying to understand (as I was, I admit) what he was saying. In my mind I thought, if this Pope was brave enough to be blunt about the faith, how many of those in the crowd would be on his side?

While the Church at large is a growing entity, how many are really Catholic beyond the title. How many really?

The Church never changes, it always remains the same, said Our Lady of Fatima. So why is there such a break in what the Church used to be and what it is today?

The Pope needs to draw a line

Just as Our Lord drew a line on the sand for someone to throw the first stone, the Pope today, must draw a line in the sand and make people choose whose side they are on. Clearly state what the Church stands for not only in prolife issues and pro-family but also for the traditional movement which is the heart of the Church.

Our Lord said he would vomit out of his mouth the lukewarm; now is the time that people need to clearly see where the line is.

The pope we need today needs to be in drastic contrast to the world.

A Pope that will not bend to the world.

A Pope that will connect the dots between the past to unite the Church one again.

A Pope that will speak clearly and strongly to the world, but with all humility and charity for the souls under his care.

The world needs: A priest that does not own golf clubs and frequent a resort.

And a priest that does not have a retirement fund, and cares more for polished shoes.

A priest that does not refuse to bring Holy viaticum to a sick parishioner because he’s ‘busy’. Yes, I sadly heard this myself, from a well-known traditional parish (who will remain unnamed).

We need a priest and a Pope that is so in love with Christ, that his only concern is the saving of souls in his care. That all his efforts go toward that end, even forgetting himself in the process.

We need a Pope with the heart of Christ today and for this we pray, though we do not deserve it. Let us pray for Francis I, so that God might grant him the grace to become the Pope we need.

May God grant us your grace that we might be worthy to call ourselves Catholic.

What are your thoughts on Francis I ? Share with me!