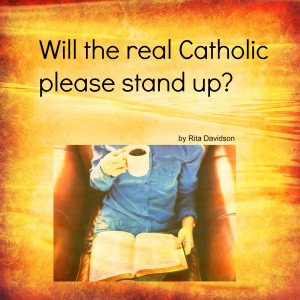 Will the Real Catholic please stand up?

This week I (unfortunately) ran across the news about Fisher More College. You see I am news-deprived here (out of choice) trying instead to keep my eyes down and moving ever forward. So, some things pass me by. 🙂

I don’t really think I am any worse for it. I mean the world is still turning when I finally look up. 🙂

If you haven’t heard about the controversy/news about Fisher More you can try google it. But I warn you curiosity killed the cat, remember?

It started with a Facebook “Like” in my feed from a fairly ‘famous’ Catholic person (who will remain unnamed to protect the innocent – Father they know not what they do), promoting an article with a comment that was a little surprising to me. Hey maybe I’m just naive?

So I clicked to see what it was all about (isn’t that always the way on Facebook?). That brought me to a blog, (which will also go unnamed). It started out describing ‘their’ version of the news in question, then resorted to name calling, in a way to make their point.

Then there was the comments, dozens of comments, assumptions, often with derogatory remarks, untruths, and half-truths. I’m like WHAT? This is a Catholic blog? I mean what could be so important to lead to such rabble?

Again, it is the ‘traditional catholic’ pitted against the ‘novus ordo catholic’ (excuse me, for lack of a better word). Each side growing more heated against each other, and words are becoming more bitter.

What I read was ton of ‘opinions’, and A LOT of emotion, one Catholic against another. True Charity no longer lives in the Universal Church. How can we really look at a fellow Catholic and call them names such as radical, superior, spiteful, Nazi sympathizer, need I say more? Satan has entered the camp, and made us all each other’s enemies today, but no one is stopping for a moment to see this!

In 2012 Pope Benedict “urged the faithful to use the internet as an untapped frontier”. I wonder if he realizes what he has unleashed?

The devil is taking his time, picking through the weak spots in the Church. Pitting one traditional Catholic against another Catholic. Sad to say, both camps are guilty of name calling, All in the name of TRUTH?

Today the enemy is inside our own Church. Are you not worried to tell your ‘friend’ or family when you started to go to the traditional Mass? I mean it’s not even called the traditional Mass but referred to as “EF “ “TLM” “OP” as if the Church itself it adding to the confusion today!

Like during the time of Christ, we are now persecuted from within our own Church. Duped by Satan that they are serving the Church, they have forgotten what they are really fighting for. We all have a common enemy here; Satan. We aren’t supposed to be taking down each other!

The four marks of the Church are:
One, Holy, Catholic, Apostolic

Do you see these marks in the Universal Church today?

Are you the real Catholic the Church needs today? Because if you are the Church, needs you.

At the end of the day, God will judge each of us by our every word; whether written or said.  Let us in fear and trembling, pray we can all make a good account for ours.